Norway has absolutely beautiful landscapes, including crazy cliffs that call to people to climb up them and then BASE jump off the top. Here’s a look at some of those incredible cliffs as well as insanely dangerous switchback roads to get to those amazing cliffs in Norway. Thrill seekers, photographers, hikers and climbers take in these majestic views of nature. And then, there are BASE jumpers who have a much more extreme need for adrenaline. Charles Lindbergh once said of his adrenaline rush, “It is the greatest shot of adrenaline to be doing what you have wanted to do so badly. You almost feel like you could fly without the plane.” Here in Norway, as if they’ve turned into Superman, some adrenaline junkies do fly without a plane. 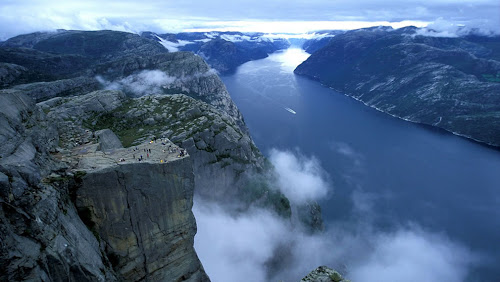 Preikestolen cliff goes by many names. The massive cliff is 604 meters (1982 feet) above Lysefjorden, Norway. 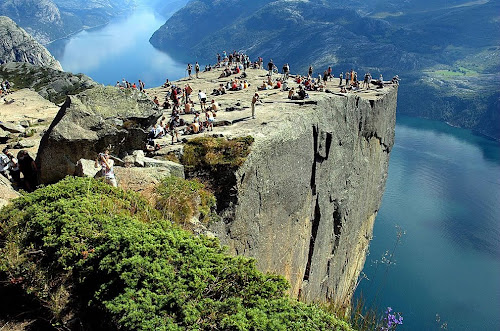 Another name for Preikestolen is Pulpit Rock. The natural rock formation is a huge Norwegian tourist attraction. The almost flat cliff is 25 by 25 meters (82 by 82 feet) with a sheer drop of over 600 meters (1982 feet) into the fjord (Lysefjord) below. 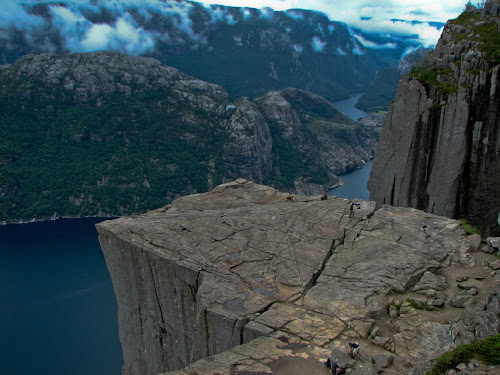 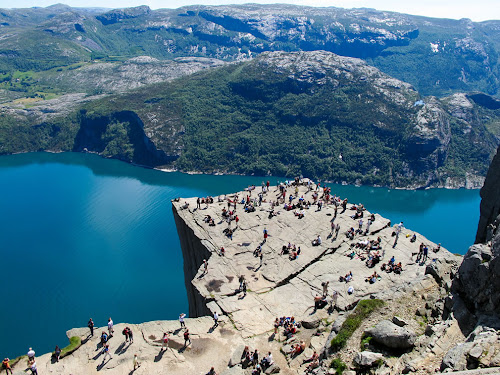 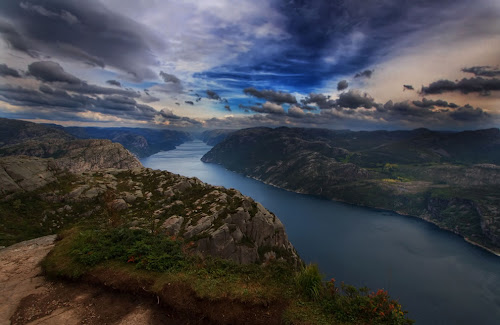 This spectacular scene is like a view from the top of the world. Right outside the frame to the right is the Pulpit Rock. 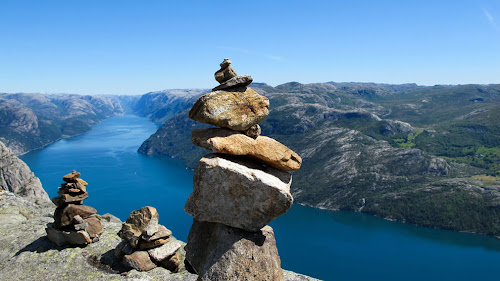 Cairn near The Preacher’s Pulpit aka Preikestolen. These cairns are man-made piles of stones and are located all over the place in and around the crazy cliffs of Norway. 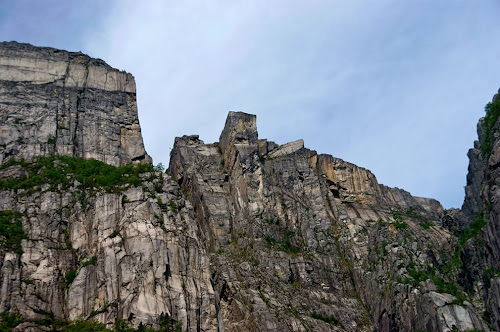 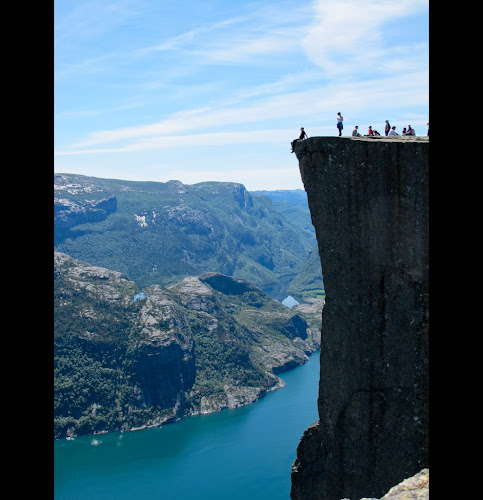 Here’s a little Preikestolen trivia. A couple who met on the Internet, formed a suicide pact, so in February 2000, this Austrian woman and Norwegian man committed a joint suicide by jumping together off the cliff. Another couple must have thought it was a good idea, but in 2004, Norwegian authorities stopped a young German couple before they could jump off the cliff to commit suicide. 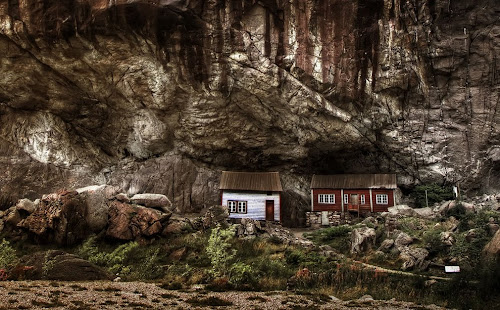 Some folks adore cliffs, like the owers of these two cool houses right outside Jøssingfjord in Norway. They are located right under an overhanging cliff! 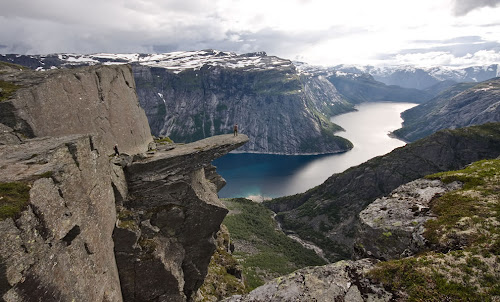 This crazy cliff is actually of rock that juts out horizontally from the mountain above Odda, Norway. It called Trolltunga, but it too has more than one name. 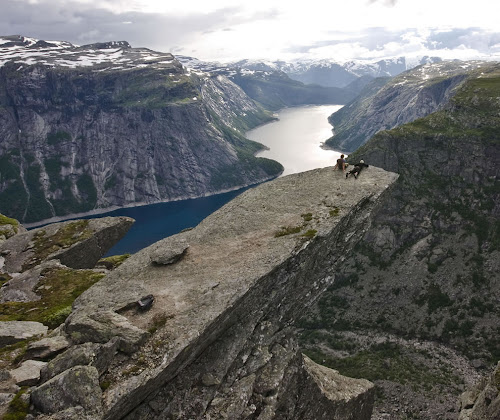 The Norwegian word for this place is Trolltunga which means Troll’s Tongue. 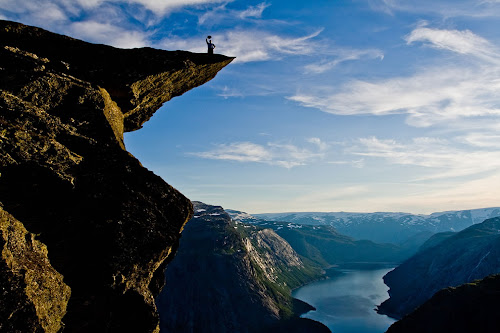 It’s a long hike to Trolltunga. There’s a 350 meter drop off the Troll’s Tongue. 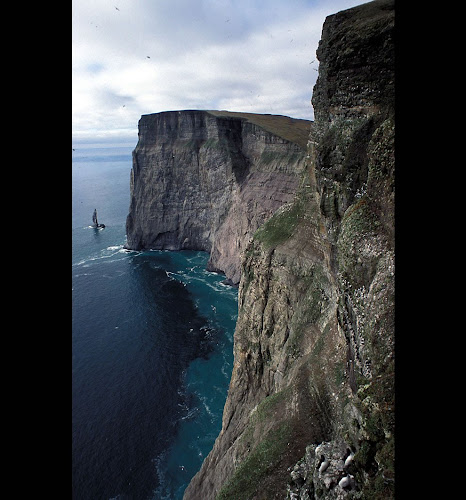 Yet another intense cliff is Brünnich’s Guillemot (Uria lomvia) at bird cliff of Stappen, southern Bjørnøya (Bear Island) in the Barents Sea. The island is part of Svalbard, Norway. Those are actual birds flying off the cliff, but as you will see a bit later, birds are not the only creatures that soar off these crazy cliffs of Norway. 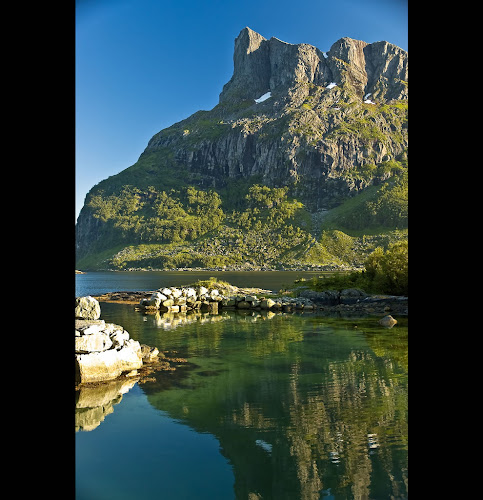 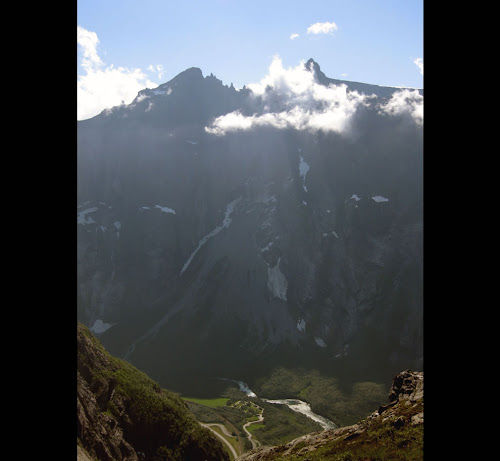 This is Troll wall in Norway. It’s the tallest cliff in all of Europe and an extremely famous spot for BASE jumpers from around the world. This shot, as seen from across the Romsdal valley, features Trolltindene peaks and the north facing Troll Wall. Trollveggen is part of the Reinheimen National Park. Troll Wall is the tallest vertical rock face in Europe, measuring about 1,100 meters (3,600 ft) from its base to the summit of its highest point. At its steepest point, the summit ridge overhangs the base of the wall by nearly 50 meters (160 ft). 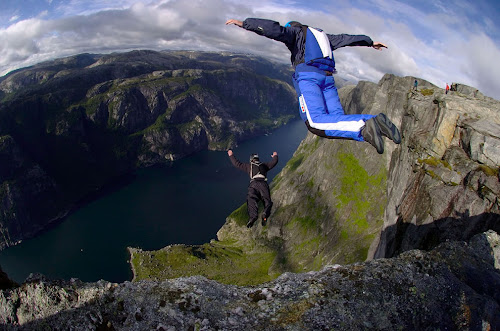 The crazy cliffs of Norway are one of the paradise locations for BASE jumpers. 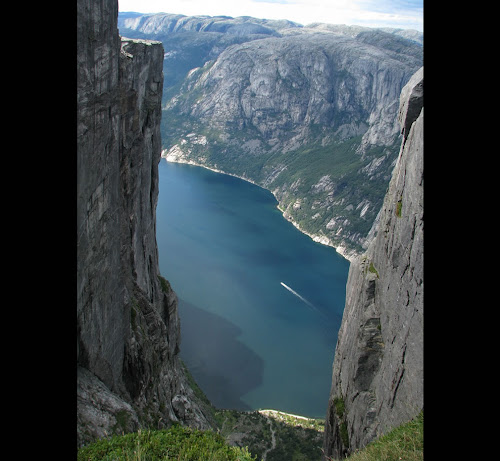 You wouldn’t want to fall without a wingsuit or parachute strapped on. BASE jumpers flock to Kjerag. Wikipedia does not have current numbers, but “in the period 1994 to 2008 29,000 jumps were performed.” 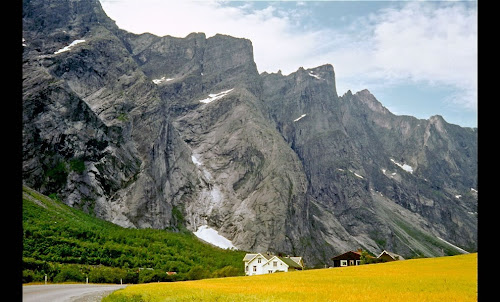 Troll Mountains. According to Wikipedia, “In 1984, Carl Boenish, the ‘father’ of BASE jumping, was killed on the Troll Wall shortly after setting the world record for the highest BASE jump in history. BASE jumping from Troll Wall has been illegal since 1986.” 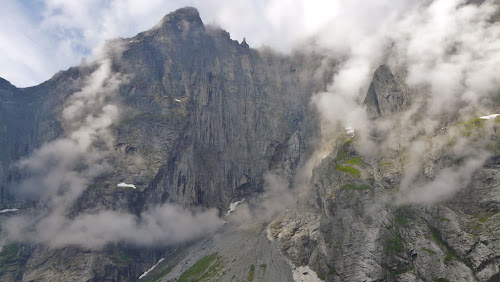 Trollveggen wrapped with clouds as seen from the northeast by the E136 road in midday. 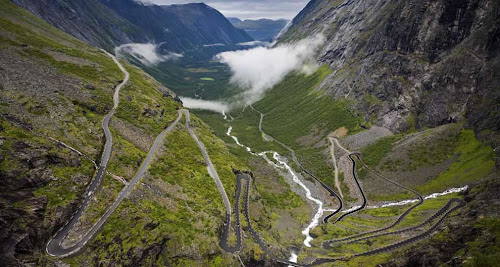 If you aren’t a troll and you want to get around, you might consider traveling Trollstigen road – which of course has another name – the Troll’s Path. Be ready for a different sort of adrenaline rush by roads such as Trollstigen which has steep incline of 9% and eleven hairpin bends up the steep side of mountain. At the top, there’s fantastic view and the 320m Stigfossen Waterfall roaring down the mountainside. 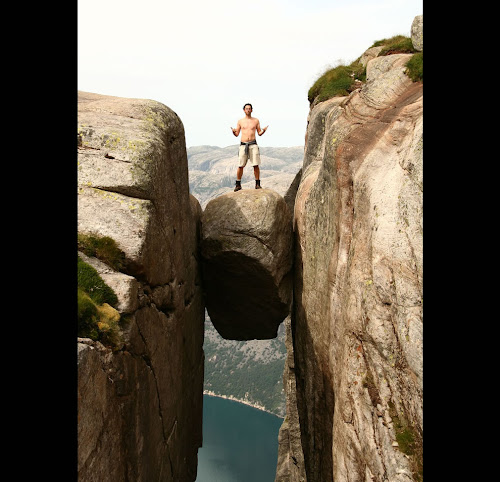 Here’s a man standing on Kjeragbolten – Kjerag boulder is wedged into a mountain crevasse in west Norway along the Lysefjord. Because Preikestolen is so crowded, Kjerag has become a popular hiking and climbing destination. You don’t need equipment to walk out onto the rock, but there is a direct 1000 m drop below down to Lysefjorden. Kjeragbolten means “Kjerag Boulder” or “Kjerag Bolt.” 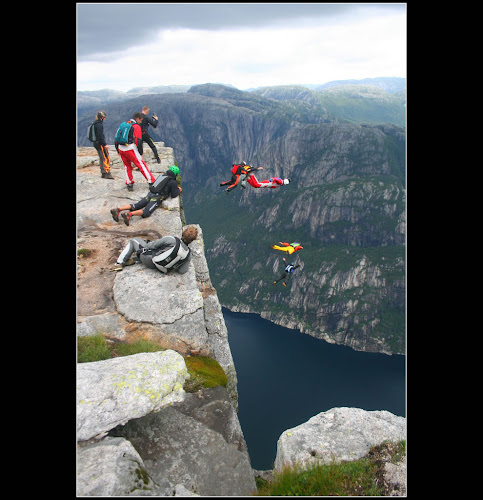 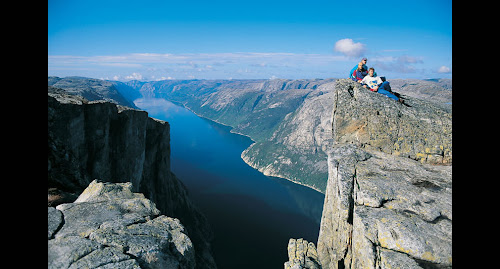 The fjord Lysefjorden as seen from Kjerag. 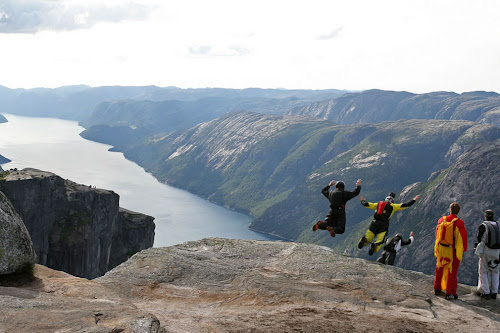 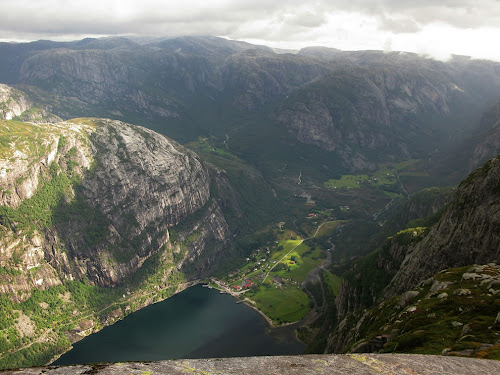 Here’s the view of Lysebotn, Norway, after you’ve made it up the insanely crazy and dangerous Lysebotn Road.